“If just one person starts opening up, that usually encourages others to do the same and what real strength and courage is, in my opinion, is showing your vulnerability.”

To some, the screams of more than 800 motorcycles at the South Street Seaport in Downtown Manhattan could have turned a cloudless, serene Sunday morning into an untenable nightmare of ringing ears and exhaust fumes. But atop these horses of tubular steel, aluminum, and carbon-fibre are not the infamous outlaws of a biker gang. These riders identify as “distinguished gentlemen,” flawlessly dressed in colorful tailored suits, matching ties, and polished shoes, all in attendance to raise money and awareness for men’s health. It’s the 2018 installment of The Distinguished Gentleman’s Ride, a fundraiser featuring coordinated motorcycle trips through cities from Los Angeles to Auckland and everywhere in between.

“A lot of people get into motorcycling because it is [an] escape,” says Mark Hawwa, founder of organization. “It’s a way they can get their minds off certain things, and you hear them talking a lot about how it’s good for the soul.”

Hawwa, 33, had organized a motorcycle-riding community in his hometown of Sydney, Australia, shortly after a trip to Japan where he was first exposed to custom bikes. He quickly became a motorcycle enthusiast, and through social media wound up connecting with riders across Australia and in other countries as well. Back then, in 2012, Hawwa says law-breaking biker hordes were capturing headlines around Australia. But when he saw a photo of Mad Men star Jon Hamm adorned in slacks, a vest, and shirt and tie while on a motorcycle, the idea for Hawwa’s fundraiser was sprung. “I thought to myself, ‘This looks amazing,’” Hawwa says. “‘What a great way to break that stereotype.’” 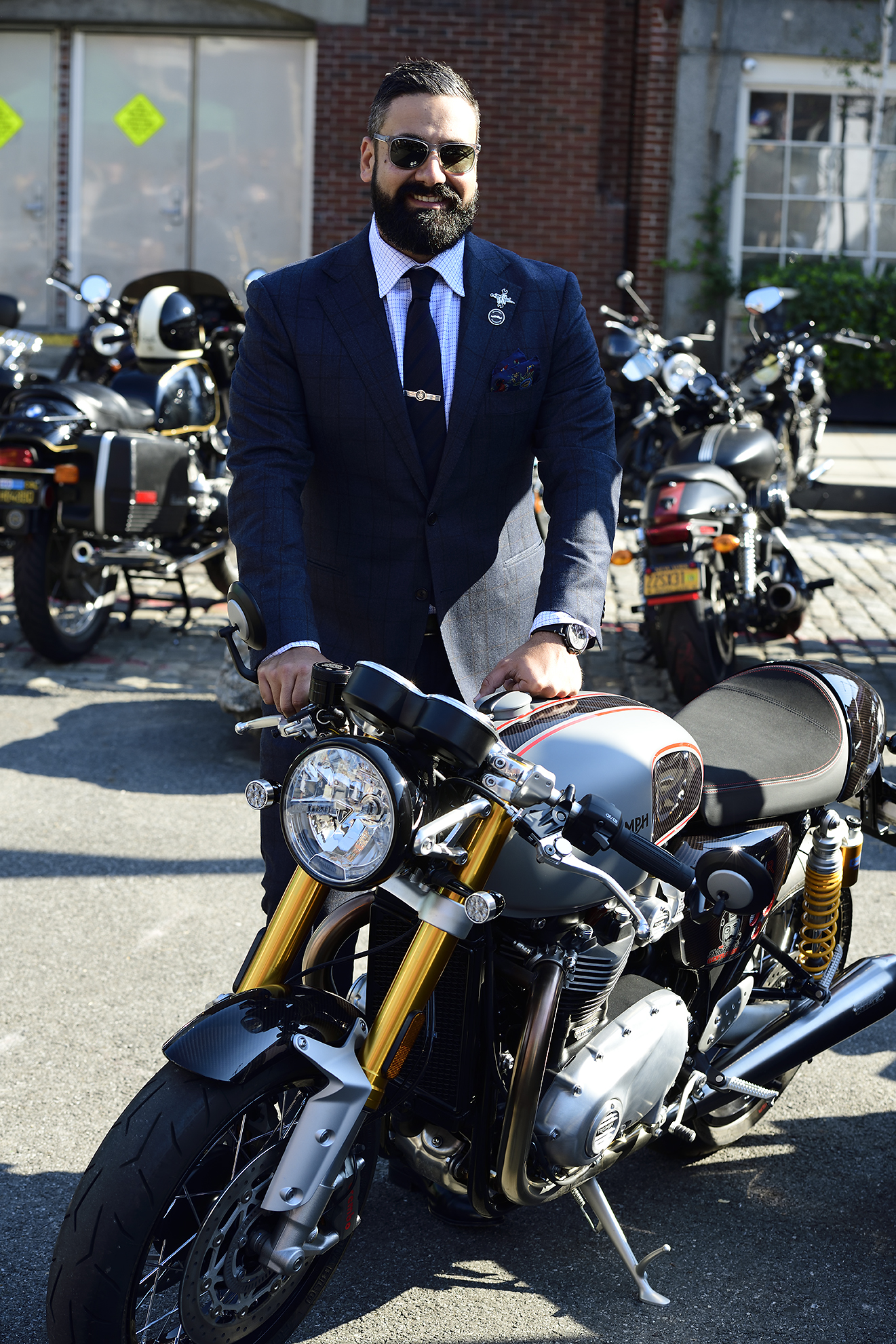 Since then, Hawwa’s growing community has worked to reverse other trends of thought, too, namely the discomfort many men feel when discussing their health—physical and emotional. No matter what they face, guys often feel they should just push through, sweeping all worries under the rug of presumed social expectations. Those involved with The Distinguished Gentleman’s Ride look to set a compassionate example by more freely expressing concerns about their health.

Hawwa dreamed of getting a bunch of friends together with suits on, and “riding through the main streets of the city”—and he envisioned this happening everywhere. “I put the call out,” Hawwa says, “and 64 of my mates from around the world turned around and said, ‘Yup, we’d like to take part in that.’”

Collectively they culled 2,500 motorcyclists into participating that first year, according to Hawwa, in 64 cities—where each friend organized a ride—across 15 countries. The Ride, now in its seventh year, was well received by both the motorcyclists and localities, and once Hawwa mobilized the community, he integrated its charity component. He decided first to target prostate cancer in fundraising efforts, so that members of the growing community might engage in typically challenging discussions about screening.

But then in 2015, a ride organizer based in Austin, Texas—he was an armed-forces veteran who suffered from PTSD, Hawwa tells me—killed himself. “That was a big shock to all of us,” Hawwa says on behalf of the ride’s community. “We started to learn that the mental health side of things was something we should be focusing much more of our time on.”

Peter Mooney, a Manhattan resident who works in software sales, has taken part in The Distinguished Gentleman’s Ride for the past two years, raising money in each of them for mental health charities. He was inspired to take part because his friend and colleague, Christian, took his own life four years ago.

“We would vacation together, I knew most of his family. We’d ski together. We’d mountain bike together,” Mooney says. “He was really just a terrific guy. I guess he had a bit of a dark side.”

One day in June 2014, Mooney received an email from Christian with a suicide note enclosed, saying that he could no longer deal with mounting pressures at work, among other troubles. Mooney remembered an incident a couple weeks prior, when Christian had said that he’d rather kill himself than figure out a complicated work problem he and Mooney were facing. Mooney—who wasn’t overtly alarmed at the seemingly offhanded remark—assured his friend that they’d find a solution. Christian thanked him later for the pep talk, but did end up taking his own life. Mooney tells me that he wishes he’d known more about suicide prevention, gotten some training on it, or even just taken action after Christian mentioned suicide.

“When I heard about what they were doing with The Distinguished Gentleman’s Ride, I was like, ‘Well, this is so cool, they’re trying to do what I wish I had’—raise awareness, and encourage people to reach out more when they feel like they need help.” 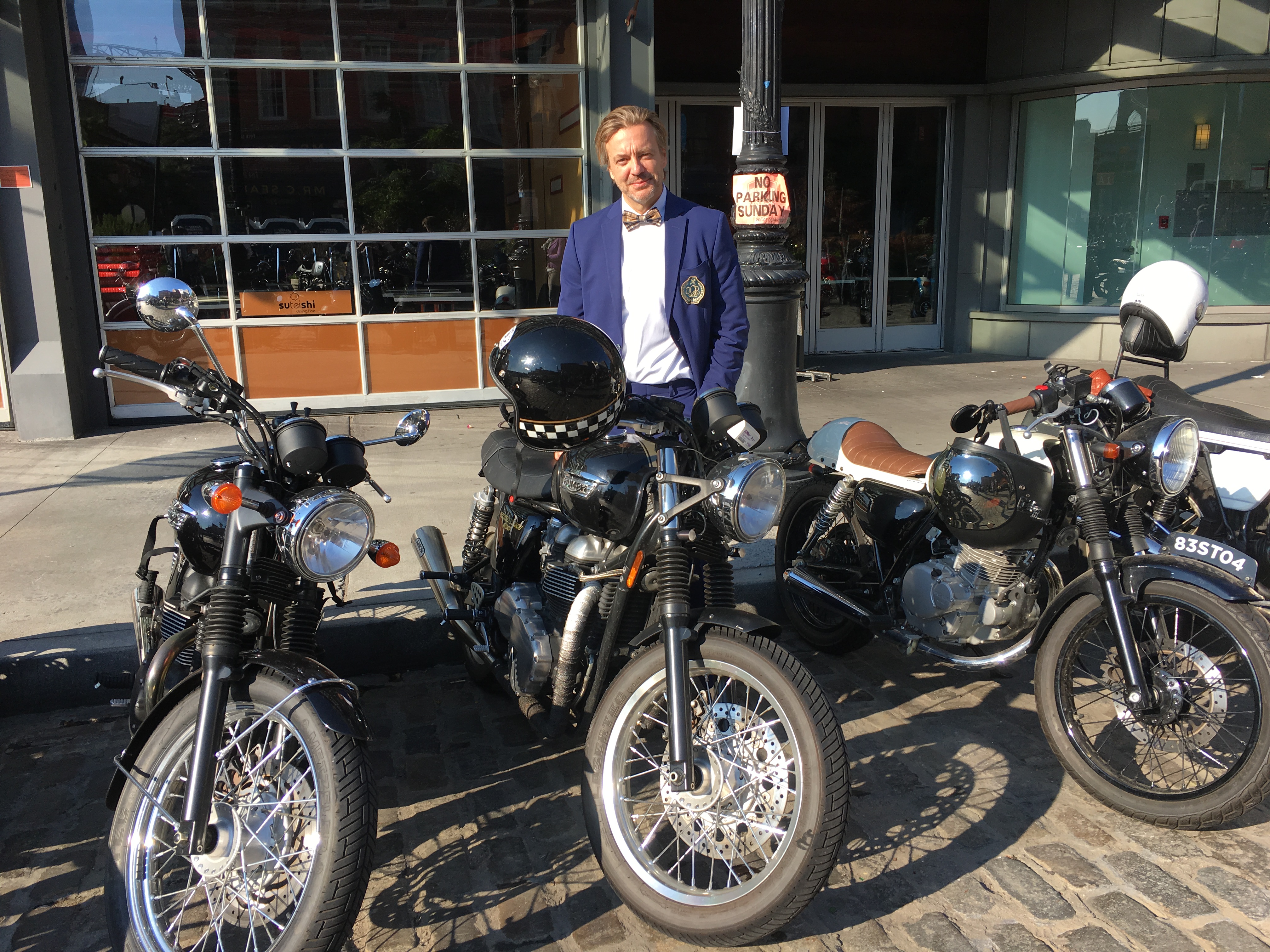 Mooney’s gotten Christian’s former coworkers to pitch in on the fundraising front, which he says has helped inject some sort of meaning into a situation where they all were feeling so helpless. Mooney says, “There’s definitely a thing with men having a problem opening up.”

A recent study by the Centers for Disease Control said that men are nearly four times more likely to kill themselves than women. The believed reason for that sizable gap is that far fewer men are likely to seek help for mental health concerns, indicating that the patriarchy produces victims across the gender spectrum.

“If just one person starts opening up,” Mooney observes about groups of male friends, “that usually encourages others to do the same [and] what real strength and courage is, in my opinion, is showing your vulnerability.”

Just before the New York City leg of the Ride started, Hawwa took the stage to thank sponsors and participants. He also expressed certainty that there’s more conversation surrounding men’s health these days—and the proof appears to go beyond the anecdotal evidence he cited.

About 12,000 riders participated in The Distinguished Gentleman’s Ride in the United States this year, which—in conjunction with Movember, a men’s health advocacy organization—raised more than $1.7 million for men’s health charities. Across the globe, 112,000-plus riders raised more than $5.6 million.

As Hawwa left the stage, the participants began readying themselves and their motorcycles. “Have fun out there,” the local organizer instructed them over the microphone. “Ride dapper.”

Community SpotLight: Ki Edwards Is Changing Lives of Those Experiencing Hair Loss Due To Illness