This Is Why Small Talk Makes Some People So Anxious

A therapist gave us advice for how to get over it.

It can be difficult to know the difference between having social anxiety and being awkward, introverted, or shy. The American Psychological Association’s Diagnostic and Statistical Manual of Mental Disorders defines social anxiety as “a persistent fear of one or more social or performance situations” that involve being “exposed to unfamiliar people or to possible scrutiny by others.”

Modern life provides us with constant opportunities to be scrutinized by others, and while few among us wouldn’t be nervous about giving a work presentation or a speech at a wedding, an ongoing fear of saying the wrong thing in casual conversations can become problematic. Conversation anxiety, though not itself a disorder, is an aspect of social anxiety that can make dates, parties, and mixers anywhere from mildly stressful to intolerable.

In her new book, How to Be Yourself, Ellen Hendriksen says social anxiety is rooted in a fear of what she calls “the reveal” of a fatal flaw that will ultimately lead to social rejection. “This distorted fatal flaw is what we carry around with us if we have social anxiety. And we work really hard to try to conceal it, because we believe that if we actually engage, or if we stop avoiding, then it will be revealed, and we’ll be judged and rejected for it,” says Hendriksen, who is also a clinical psychologist at Boston University’s Center for Anxiety and Related Disorders. 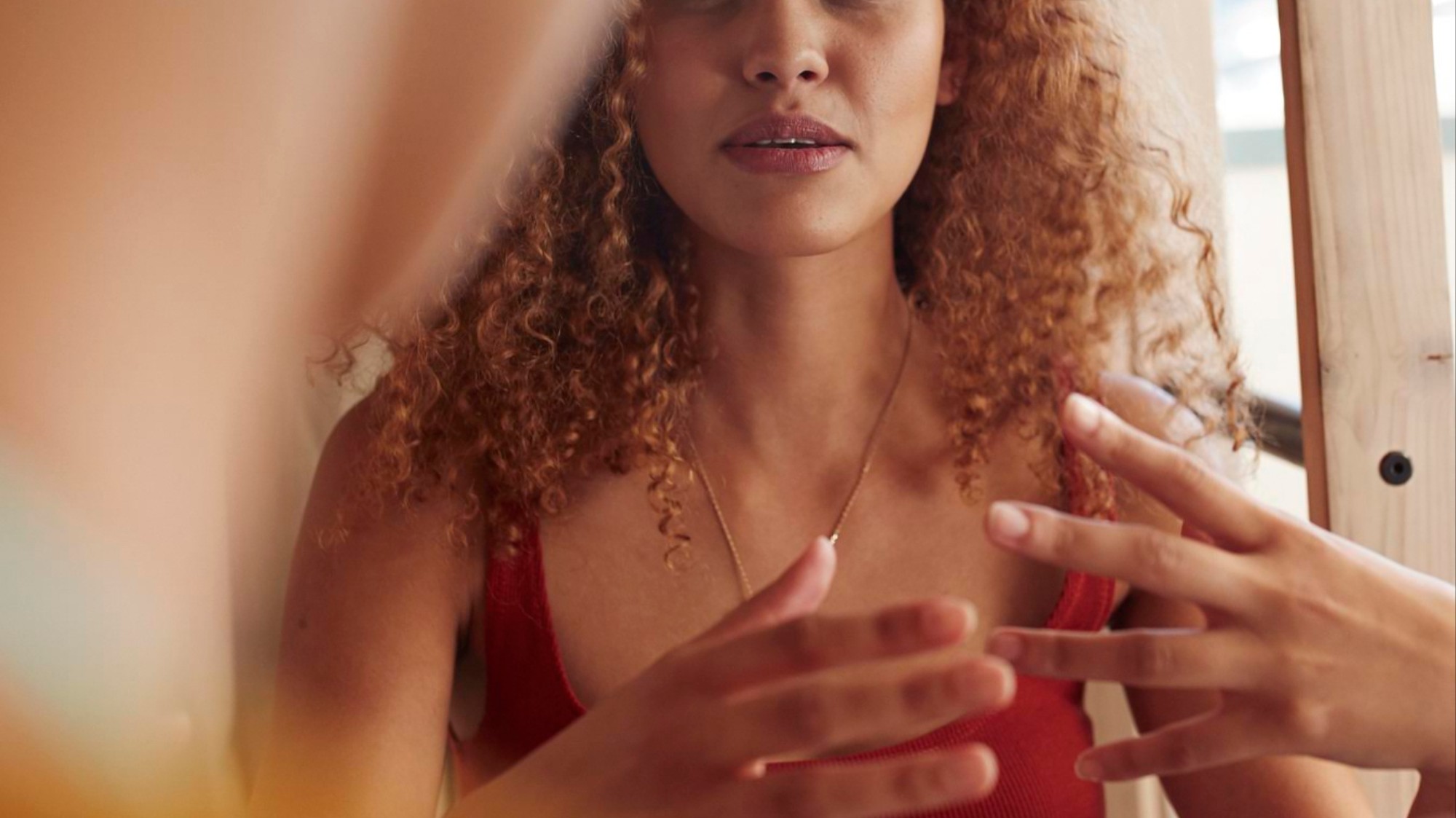 Hendriksen’s reveal concept is based on the work of researcher David Moscovitch, who argues that the perceived flaw can be in any one of four areas—social skills, inability to conceal anxiety, physical appearance, or character. “What makes it a disorder is that this thing we’re worried about is either not true or there’s a grain of truth to it but nobody really cares,” Hendriksen says.

We all have insecurities and shortcomings that we’d prefer others not to know about. But if your fears of being found out cause more distress than seems appropriate for the situation, you might be dealing with symptoms of social anxiety. “If you have to give a presentation at work and lose sleep over it for the whole week, or if you’re going to go on a date and you can’t eat because your G.I. system is acting up, that is not proportional to the task at hand,” Hendriksen adds.

One idea for overcoming conversation anxiety is to come up with a script to prepare for dates or parties. In theory, a script would take the edge off of the uncertainty, which is somethin people with anxiety really struggle with. But scripting has serious limits: If you’ve planned everything you’re going to say ahead of time, you leave little room to respond in real time to the person you’re trying to connect with. Hendriksen says that while it’s okay to keep some stock stories in your back pocket, casual conversations generally shouldn’t require preparation. Scripting might actually make anxiety worse because it encourages excessive focus on the self.

“As more of our attention turns inward, the more self-conscious we feel. That takes up a lot of our bandwidth, and then we have very little left over for actually paying attention,” Hendriksen says. “We might miss the conversations that we’re supposed to be a part of, or come off as preoccupied or distracted which then makes for a poor conversation.”

Instead, if you’re worried about saying the wrong thing, sounding stupid, or otherwise being exposed as a no-social-skills-having ogre, Hendriksen suggests shifting your attention from yourself to those around you. “Pay attention to the people you’re taking to. Listen to what they have to say. When you’re truly listening, questions and comments naturally arise, so you don’t have to scan for them or plan them out,” she says. “Then you’ll have the bandwidth to be filled with natural curiosity, interest, and friendliness. And that tends to go over much better with other people.”

There may be no place more effective at evoking the fear of looking and sounding ridiculous than a party or networking event. If you’re able to secure a good conversation partner early on, you might think your troubles are over—that is, until that person walks away to grab a refill and you’re left standing alone, awkward, and possibly bombarded by a river of unwanted thoughts. You reach for your phone and pretend to be looking at something important, while simultaneously hoping no one sees you refreshing your Instagram feed. You wonder if anyone nearby saw that you had no new likes or follows.

Even Hendriksen says she can relate to this situation. Her advice remains the same: Get out of your head and focus on someone else. “I’ll find another person who’s standing awkwardly alone or scrolling through their phone. That almost always goes well, because you’re kind of rescuing them. They’re not really looking at their phone, they’re trying to quell the awkwardness. So if you walk up and say hello, more often than not they’ll be relieved and are delighted to chat.”

A recent study of undergraduate students with social anxiety symptoms found, unsurprisingly, that young adults with higher levels of social anxiety were more likely to expect that they would feel bad in certain social interactions. “This could potentially cause them to avoid those types of situations altogether if they’re expecting to feel bad,” says Kimberly Arditte Hall, the lead author of the paper and a postdoctoral fellow at the VA National Center for PTSD.

Understanding the thought process behind social anxiety is important because it sheds light on how to help people overcome it. When it comes to having negative beliefs or expectations about conversations, Arditte Hall says we may want to actively target those types of thoughts using something like cognitive restructuring—a core feature of cognitive behavioral therapy (CBT) that involves identifying your thoughts and looking at whether or not they’re both realistic and helpful to you. “And then trying to be flexible about changing them or thinking about alternative beliefs that are more helpful as you move forward,” Arditte Hall says.

Of course, sometimes social interactions really are painful or difficult, and people with social anxiety may need some extra help learning how to tolerate those experiences, as well as the aftermath of them. “Exposure, or confronting situations that bring about negative emotions is a core component of CBT for social anxiety, and involves allowing yourself to feel the emotions without doing anything to change or avoid them,” Arditte Hall says. “It often helps people to learn that they are more capable of managing negative emotions than they initially thought.”

Because mistakes are bound to happen, learning to let go and move forward rather than get caught in cycles of post-event rumination is key. Arditte Hall says that dwelling on what went wrong can lead to a build-up of negative emotions like embarrassment and shame, which can actually set up the cycle for social anxiety to reoccur. She recommends distracting yourself with something that feels meaningful, or simply doing something that uses mental energy. She also recommends self-compassion.

“You’re not going to be perfect, especially if you’re trying to challenge something that’s difficult for you to begin with. And that’s okay,” Arditte Hall says. Making mistakes in social situations is a part of what it means to be human. Maybe you don’t perform perfectly, sound smart, or impress others in every social situation. But the truth is, neither does anyone else.

What You Should Know About Drinking Weed